After his scholarship he invented several mechanical devices: a turbine engine, and bicycle brake being just two of them.

Astor was a Lieutenant Colonel during the American & Spanish War.

Astor also wrote a Science fiction novel in 1894 “A Journey In Other Worlds.”

In 1891 Astor Married Ava Lowie Willing, a Philadelphia socialite. They had two children William Vincent Astor & Ava Alice Murial Astor. The marriage was a very unhappy one with infidelities on both sides. They divorced in 1909.

On September 9th 1911, Astor, aged 47, married Madeline Talmadge Force aged 18. ( His 19 year old son was the best man). In 1912 the happily married couple boarded the Titanic in Cherbourg, France. Madeline was 7 months pregnant at the time.

Astor did not survive the sinking, but Madeline did. Astor provided her $5,000,000 from his will with the proviso that she did not re-marry. Madeline did re-marry – twice in fact. She had two more children but lost the money. 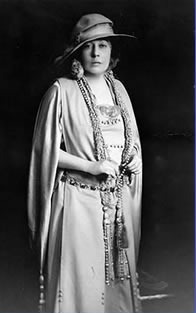 Margaret was born in Hannibal, Missouri, one of six children of Irish immigrants. At 18, she moved to Leadville, Colorado with her sister, obtaining a job in a department store.

It was also in Leadville that she first became involved in women’s rights, helping to establish the Colorado chapter of the National American Women’s Suffrage Association, and worked in soup kitchens to assist miners’ families.

The family came into great wealth when J.J’s engineering efforts proved instrumental in the production of a substantial gold and copper seam at the Little Jonny (sic) mine of his employers, Ibex, and he was awarded 12,500 shares of stock and a seat on the board.

In 1894 they moved to Denver, Colorado, which gave the family more social opportunities and Margaret became a charter member of The Denver Woman’s Club, whose mission was the improvement of women’s lives through continuing education and philanthropy.

In 1901 she was one of the first students to enroll at the Carnegie Institute in New York. In 1909 and 1914 she ran for congress, and she also assisted in the fundraising for Denver’s Cathedral of the Immaculate Conception that was completed in 1912. Margaret also worked with Judge Ben Lindsey to help destitute children and establish the United States first Juvenile Court which helped form the basis of the modern USA juvenile courts system.

In 1909, Margaret and J.J privately separated, but remained close until his death in 1922.

Margaret was traveling on the Titanic because she needed to reach her ill grandson, Lawrence, who was in America.

When the ship collided with the iceberg and began to sink, Margaret helped many others to lifeboats before being forced into one herself. Once in the water, she and the other women in the lifeboat worked together to row and keep spirits up.

When the RMS Carpathia arrived to rescue the survivors, Margaret assisted with the rescue efforts, her proficiency in languages an asset, she helped prepare survivor lists for outside communication and raised funds with other rich survivors to help those less fortunate among surviving passengers and crew, collecting $10,000 by the time the ship made port in New York City.

For her calm action in the disaster, the media acclaimed her as one of the heroines of the hour. She was quoted as saying that her survival was attributable to “typical Brown luck…we’re unsinkable”. She became known as the Unsinkable Mrs Brown for the rest of her life. 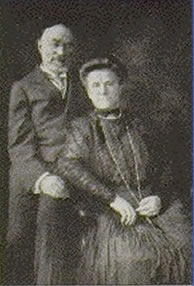 Isidor Straus started to sell glassware and china in R.H Macy’s in 1873. By 1896 the enterprise was so successful that the Starusses purchased the entire store.

Isidor Straus was a trusted advisor to President Grover Cleveland, and he was elected as a Democrat to the fifty-third Congress to fill the vacancy caused by the resignation of Ashbel P. Fitch, and served from January 30, 1894, to March 3, 1895. He did not run for reelection in 1894 to the Fifty-fourth Congress.

Straus resumed the mercantile business in New York City and served as a member of the New York and New Jersey Bridge Commission. He was also a founder of an endowment fund for the Jewish Theological Seminary.

Ida and Isador Strauss sailed on the maiden voyage of the Titanic. On the night of the sinking, Ida was told to get into a life boat. She repeatedly refused as she would not leave without her husband, in fear of never seeing him again. The officer filling up the boat told Isidor that he could get into the boat with his wife, but he was 67 and didn’t expect to survive the Titanic. He refused to get in the boat before other men and saved the position for a young woman.

It is said that the couple retired to their room and lay on their bed together, for their final hours.

Over 40,000 people attended the couple’s memorial service, and their story was told in a Yiddish song by Solomon Smulewitz.

Writer, Elbert Hubbard, said about both Mr. and Mrs. Straus, “Mr. and Mrs. Straus, I envy you that legacy of love and loyalty left to your children and grandchildren. The courage that was yours all your long and useful career was your possession in death. To pass out as did Mr and Mrs. Straus is glorious. Few have such a privilege.”

Today, a memorial still exists to the Strauses. A reclining woman is the central figure of a fountain dedicated in their honor. The memorial is located at Broadway and West 106th Street in New York City.

In 1894 he married Floretta Seligman, daughter of a prominent New York City banker with whom he had three daughters, Benita, Peggy, and Hazel.

While Guggenheim inherited a great deal of money from his father, he did not inherit his father’s business acumen and Benjamin Guggenheim’s inheritance dwindled considerably from a number of poor investments. He grew distant from his wife and ostensibly for business reasons, was frequently away from their New York City home. He maintained an apartment in Paris, France and was returning home from there when he boarded the RMS Titanic at Cherbourg, Manche, France, on April 10, 1912, accompanied by his mistress, a French singer named Léontine Aubart (1887-1964).

On the night of the sinking Guggenhiem and his Valet returned their lifebelts to a steward and retired to Guggenheims cabin to dress in formal attire. Re-appearing on deck, Guggenheim stated :- “We’ve dressed in our best, and are prepared to go down like gentlemen.” He later asked a steward to – “Tell my wife in New York I did my best in doing my duty.”

Reportedly, after seeing to the safe departure of his mistress and her maid in a lifeboat, Guggenheim and his valet sat in chairs on the tilting deck, sipping brandy and smoking cigars as the ship sank.

After coming aboard the Carpathia she sent a Marconigram to Paris on 18 April 1912: